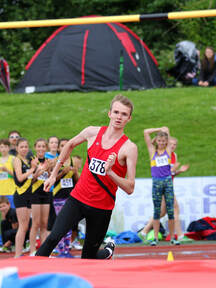 WIMBORNE ATHLETIC CLUB was established in 1984 and is run to promote and encourage participation in recreational and competitive athletics in Wimborne and the surrounding areas for those aged eight through to adults. Its principal aims are as follows:
To provide a safe and structured training environment to encourage children, teenagers and mature athletes to enjoy the activities and develop their potential.
To organise and run training sessions which enable its members to attain and maintain competitive fitness levels.
To liaise with schools, parents and other local clubs to increase awareness of athletics in the area and offer an appropriate club structure where athletics is sustainable.
To offer competitive opportunities for athletes.
To build up a social structure within the club which has the merit of team building as well as providing opportunities for fundraising.

The coaches and officers of the Club are largely comprised of individuals who were athletes or have/had children at the Club as current/previous athletes, and the Club is run on a voluntary basis.
The Club is managed by an Executive Committee, elected annually at an Annual General Meeting, and working within the Club Constitution and Rules.
The Executive Committee meets at least bi-monthly.
Wimborne AC is affiliated to England Athletics, South Of England AA and Dorset County AA.  All members are individually affiliated to England Athletics by the Club.
The Club is essentially funded by the annual subscriptions of its members plus track fees levied at each training session. Other sources of funds are donations, grants and social events. The majority of its expenditure is accounted for by the hire of indoor and outdoor facilities at the QE Leisure Centre. Equipment also has to be purchased and replaced and fees have to be paid for affiliation to Athletic bodies and leagues. The Club endeavours to keep its running expenses to a minimum and attempts to break even on a year-on-year basis.
The Club endeavours to provide its members with opportunity to participate in the widest possible selection of events across the athletic spectrum. To this end, it attempts to recruit, retain and develop a cross section of coaches who understand the needs of both the Athletes and the Club and are committed to maximising potential whilst ensuring that the ethos of enjoyment is always at the forefront of all activities.
Coaches are available for all the main track and field disciplines and hold various coaching level qualifications. It is now a requirement of UK Athletics that all coaches are screened by the Criminal Records Bureau.
Whilst the Club actively supports and encourages parents and helpers to become qualified coaches, it also recognises that certain individuals will freely give up their time to assist the Coaches without the pressure of qualifying as a Coach. The Club is, therefore, supportive and grateful to any person who feels they can make a contribution of their time, however small, to help the Club deliver its coaching aims.
​
Structured competition in athletics commences at UNDER 13 level although there are a limited number of opportunities to compete at UNDER 11 level on a friendly basis. Age groups for both sexes follow this pattern: UNDER 13 – UNDER 15 – UNDER 17 – UNDER 20 – SENIOR. Competitors must be under the age limit on 31 August in the year in which they are competing. In effect, this means that they compete for two seasons at each of the junior age groups.
Wimborne AC competes in its own right in the Southwest and Wessex leagues and as part of Team Dorset (composite team) in the Young Athletes and Southern Athletic leagues.
Dependant upon venue and numbers, the Club may provide transport to and from competition venues. Athletes and parents wishing to avail themselves of such transport (usually coach or minibus) are asked to pay a contribution towards the cost. Parents able and willing to car share to such competitions offer a more economic prospect for the Club, enabling limited funds to be redirected.
Membership of the Club is a pre-requisite for competing for the Club. Athletes representing the Club at competitions are required to wear Club colours; club vests available from the Treasurer at subsidised prices. Athletes are required to conduct themselves in a professional manner when travelling to and representing the Club at such fixtures. The Club also trains for and competes in the indoor SPORTSHALL series run during the winter as well as several locally run cross-country fixtures.